Israel to legalize cannabis for recreational use

25 Nov Israel to legalize cannabis for recreational use

Posted at 09:41h in cannabis compound by Tebogo
Share

Israel to legalize cannabis for recreational use

According to recommendations of interministerial team, marijuana will be sold to users aged 21 and up, but not for consumption in public

Israel is planning to legalize cannabis for recreational use within nine months while balancing “liberalism and responsibility,” Justice Minister Avi Nissenkorn said Thursday.

Nissenkorn presented the recommendations of an interministerial team that has been reviewing the matter, alongside Likud MK Sharren Haskel and Blue and White MK Ram Shefa, who have been leading their respective parties’ efforts on the issue.

The justice minister said an explanatory memorandum of a bill formulated in accordance with the recommendations would be published by the end of November and that the legalization would go into effect nine months after it is approved, to allow government ministries time to prepare.

“It’s time to make progress and legalize cannabis in Israel,” Nissenkorn said. “This is a significant, holistic and responsible reform, which shows the State of Israel isn’t ignoring reality and is going in the footsteps of developed countries.”

According to the new law being promoted, people age 21 and up will be allowed to purchase cannabis at specialized stores. They will be required to show identification.

The drug will not be allowed to be taken into or out of the country. The stores will be allowed to make deliveries but will be barred from selling cannabis edibles that resemble candy.

The state will “ensure the prices are reasonable” to avoid encouraging customers to go to the black market, according to the interministerial team’s recommendations.

However, the law will likely include a blanket ban on smoking cannabis in public spaces. It will not allow home growing of the plant without a license, though the team recommended that the matter be weighed at a later stage. 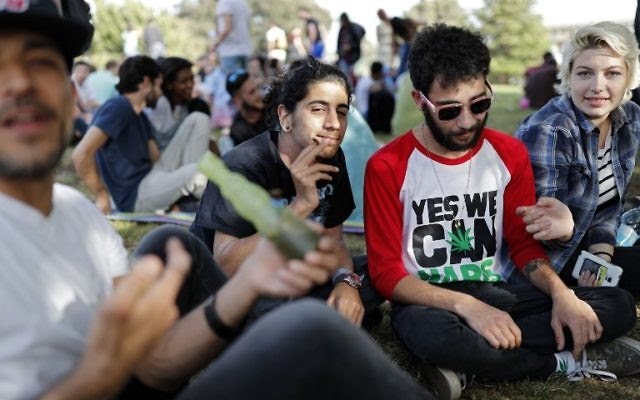 Israelis smoke marijuana joints in Jerusalem on April 20, 2017, during a rally at the Rose garden, to celebrate 420 and to express their defiance of current laws. (AFP PHOTO / THOMAS COEX)

The team suggested that various bodies that require security screening reconsider the current policy, which disqualifies people who use cannabis.

Deputy Attorney General Amir Merari said the government’s opinion is to favor legalization over decriminalization, which is more common in other countries, since “decriminalization doesn’t provide a solution for problems such as the black market.”

Haskel and Shefa both hailed the move, with the Likud lawmaker saying it “does justice to more than a million lawful citizens” and the Blue and White MK saying: “We will not let anyone in the Knesset or outside it stop us.”

Israel has taken steps in recent years to make medical cannabis available and is poised to become a major exporter of the crop, though local medical cannabis users have complained of near-impossible access to the few dispensaries licensed to distribute it.

Recreational use of the drug is currently illegal, though the Public Security Ministry partially decriminalized it in 2017, setting fines and treatment for initial offenders instead of criminal procedures.

Many of the recommendations were reported Wednesday by Channel 13 news. According to an earlier report on Sunday by Channel 12, the new legislative push came about following a change of tack within the Health Ministry, which was run until recently by United Torah Judaism leader Yaakov Litzman. 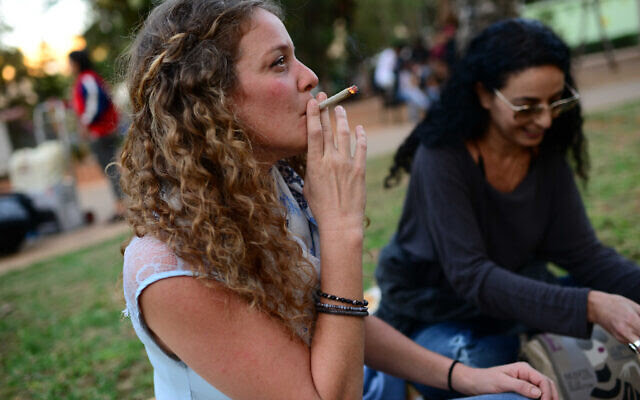 Young people gather in Meir park in Tel Aviv, during a rally in support of legalizing marijuana. November 11, 2017. (Tomer Neuberg/FLASH90)

In June, two linked bills to legalize cannabis use passed preliminary readings in the Knesset ahead of the three votes required for them to become law. Those bills also outlined that selling and purchasing marijuana for personal use would be legal for those above 21 in authorized shops, but growing marijuana at home would still be illegal.

Prime Minister Benjamin Netanyahu’s Likud and Defense Minister Benny Gantz’s Blue and White parties said in a joint statement at the time that they would advance legislation “to resolve the issue of decriminalization and legalization.”

The matter would be done “via a responsible model that will be suited to the State of Israel and the Israeli population,” the statement said.

The statement noted that they had also decided to push medical cannabis reforms in order to make it easier for patients to get access to treatment and for growers to get a license.